skip to main | skip to sidebar

Plenty of kind, decent, caring people have no religious beliefs, and they act out of the goodness of their hearts. Conversely, plenty of people who profess to be religious, even those who worship regularly, show no particular interest in the world beyond themselves.
許多厚道、正派、仁慈的人沒有宗教信仰，他們憑自己的善心行事。相反，許多自稱虔誠的教徒，甚至包括那些時常祈禱的，除了關心自己，對世界似乎並不特別感興趣。
- John Danforth, priest, ambassador, senator (b. 1936)

When you battle with your conscience and lose, you win.
與自己的良心交戰落敗，是一種勝利。
- Henny Youngman, comedian and violinist (1906-1998)

The propagandist's purpose is to make one set of people forget that certain other sets of people are human.
宣傳者的目的，是令某些人忘了另外一些人也是人。
- Aldous Huxley, novelist (1894-1963)

A belief which leaves no place for doubt is not a belief; it is a superstition.
容不下任何懷疑的信仰不是信仰，是迷信。
- Jose Bergamin, author (1895-1983) 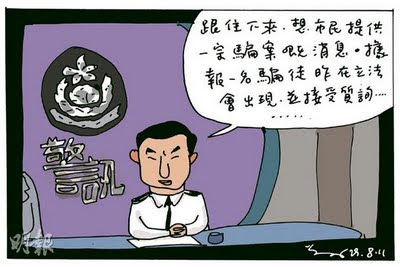 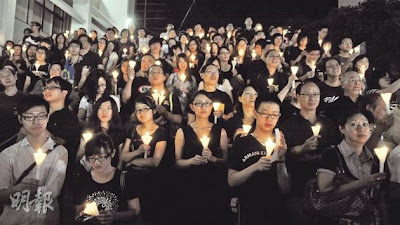 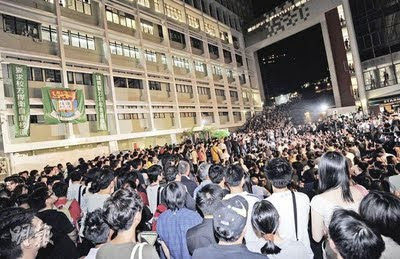 The perfection of a clock is not to go fast, but to be accurate.
時鐘的完美狀態不是走快點，而是準確。
- Luc de Clapiers, marquis de Vauvenargues, moralist and essayist (1715-1747)

Do not believe that it is very much of an advance to do the unnecessary three times as fast.
別以為以三倍速度去做多餘的事，是了不起的進步。
- Peter Drucker, management consultant, professor and writer (1909-2005)

It is an ironic habit of human beings to run faster when we have lost our way.
人類習慣在迷路時跑快點，這實在諷刺。
- Rollo May, psychologist (1909-1994)

In this world there are only two tragedies. One is not getting what one wants, and the other is getting it. The last is much the worst.
世上只有兩種悲劇。一種是得不到自己想要的，另一種是得到了。後者慘得多。
- Oscar Wilde, writer (1854-1900)

We sometimes congratulate ourselves at the moment of waking from a troubled dream; it may be so the moment after death.
有時從惡夢中醒來後，我們會感到慶幸；或許我們死後也將如此。
- Nathaniel Hawthorne, writer (1804-1864)

When one has been threatened with a great injustice, one accepts a smaller as a favor.
在遭受巨大的不公義威脅後，人們會接受程度較輕的不公義，並認為這是一種恩惠。
- Jane Welsh Carlyle, letter writer (1801-1866)

大學的客人李克強，學了點江澤民的風雅，也在港大百年校慶講幾句英語了。他先用中文演講，接近尾聲時，特意講兩分鐘英語：The University of Hong Kong was used to be for China and the world. And just now, he（徐立之校長）once again stressed that HKU is a university built for China and the world. To echo the Vice Chancellor Xu's view, indeed, HKU is for HK. Attracting talents and educating people is promote HK's prosperity. HKU is for China. It has become a key higher education institution in China, playing an increasingly important role in China's development and its integration with the world.

And HKU is also for the world. It has become an integral part of the world event community of advancing human knowledge. As the University of Hong Kong is proudly celebrating its first 100 years, I strongly believe that, in the next 100 years, it would be even better.

最後，也提一下唐英年的英語。八月十九日，記者以英語追問，有批評指有關保安安排違反言論自由及新聞自由，唐英年不以為然，以英語嚴辭指摘有關批評「完全是垃圾」：I think that is completely rubbish that we have violated civil rights, nor have we violated freedom of speech, because every single activity of the Vice-Premier has been covered by the media.

The voice of conscience is so delicate that it is easy to stifle it; but it is also so clear that it is impossible to mistake it.
良心之聲非常柔弱，很容易壓制，但它無比清晰，不可能誤解。
- Madame De Stael, writer (1766-1817)

I hate mankind, for I think myself one of the best of them, and I know how bad I am.
我討厭人類，因為我認為自己在他們當中出類拔萃，但我也知道自己有多糟。
- Samuel Johnson, lexicographer extraordinaire 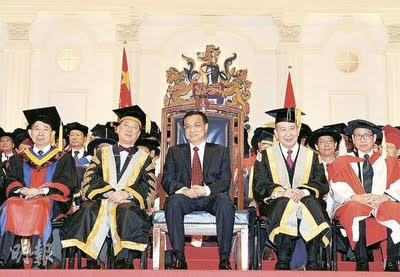 中共說的「驕傲」，其實是英文pride的化身。Pride可以解作「驕傲」，也可以解作「光榮」或「值得引以為榮的人或事物」，例如：(1) Beautiful as she is, her pride repels me (她固然美麗，但我不喜其驕傲)。(2) We take pride in the revival of Confucianism(我們以儒道復興為榮)。現代漢語不是奉英文為金科玉律，就不會以「驕傲」取締「光榮」，不會說甚麼「劉翔豈惟吾黨驕傲」等等。

I think there is only one quality worse than hardness of heart, and that is softness of head.
我認為只有一種特質比冷酷無情更糟，那就是頭腦不清楚。
- Theodore Roosevelt, 26th US President (1858-1919)

It is one of the maladies of our age to profess a frenzied allegiance to truth in unimportant matters, to refuse consistently to face her where graver issues are at stake.
我們這時代的一大弊病，是對雞零狗碎的事瘋狂熱衷，重要的事卻一再迴避。
- Janos Arany, poet (1817-1882)

The question why there is evil in existence is the same as why there is imperfection... But this is the real question we ought to ask: Is this imperfection the final truth, is evil absolute and ultimate?
世上為何會有惡？這問題跟事物為什麼不完美是一樣的……但我們真正該問的是：這種不完美是終極事實嗎？邪惡是確鑿無疑、無可改變的嗎？
- Rabindranath Tagore, poet, philosopher, author, songwriter, painter, educator, composer, Nobel laureate (1861-1941)

It came to me that reform should begin at home, and since that day I have not had time to remake the world.
有一天我發現，改革應該從家裡做起。自此之後，我再沒有時間去改造世界。
- Will Durant, historian (1885-1981)

OUR leaders have asked for “shared sacrifice.” But when they did the asking, they spared me. I checked with my mega-rich friends to learn what pain they were expecting. They, too, were left untouched.

While the poor and middle class fight for us in Afghanistan, and while most Americans struggle to make ends meet, we mega-rich continue to get our extraordinary tax breaks. Some of us are investment managers who earn billions from our daily labors but are allowed to classify our income as “carried interest,” thereby getting a bargain 15 percent tax rate. Others own stock index futures for 10 minutes and have 60 percent of their gain taxed at 15 percent, as if they’d been long-term investors.

These and other blessings are showered upon us by legislators in Washington who feel compelled to protect us, much as if we were spotted owls or some other endangered species. It’s nice to have friends in high places.

Last year my federal tax bill — the income tax I paid, as well as payroll taxes paid by me and on my behalf — was $6,938,744. That sounds like a lot of money. But what I paid was only 17.4 percent of my taxable income — and that’s actually a lower percentage than was paid by any of the other 20 people in our office. Their tax burdens ranged from 33 percent to 41 percent and averaged 36 percent.

If you make money with money, as some of my super-rich friends do, your percentage may be a bit lower than mine. But if you earn money from a job, your percentage will surely exceed mine — most likely by a lot.

To understand why, you need to examine the sources of government revenue. Last year about 80 percent of these revenues came from personal income taxes and payroll taxes. The mega-rich pay income taxes at a rate of 15 percent on most of their earnings but pay practically nothing in payroll taxes. It’s a different story for the middle class: typically, they fall into the 15 percent and 25 percent income tax brackets, and then are hit with heavy payroll taxes to boot.

Back in the 1980s and 1990s, tax rates for the rich were far higher, and my percentage rate was in the middle of the pack. According to a theory I sometimes hear, I should have thrown a fit and refused to invest because of the elevated tax rates on capital gains and dividends.

I didn’t refuse, nor did others. I have worked with investors for 60 years and I have yet to see anyone — not even when capital gains rates were 39.9 percent in 1976-77 — shy away from a sensible investment because of the tax rate on the potential gain. People invest to make money, and potential taxes have never scared them off. And to those who argue that higher rates hurt job creation, I would note that a net of nearly 40 million jobs were added between 1980 and 2000. You know what’s happened since then: lower tax rates and far lower job creation.

The taxes I refer to here include only federal income tax, but you can be sure that any payroll tax for the 400 was inconsequential compared to income. In fact, 88 of the 400 in 2008 reported no wages at all, though every one of them reported capital gains. Some of my brethren may shun work but they all like to invest. (I can relate to that.)

I know well many of the mega-rich and, by and large, they are very decent people. They love America and appreciate the opportunity this country has given them. Many have joined the Giving Pledge, promising to give most of their wealth to philanthropy. Most wouldn’t mind being told to pay more in taxes as well, particularly when so many of their fellow citizens are truly suffering.

Twelve members of Congress will soon take on the crucial job of rearranging our country’s finances. They’ve been instructed to devise a plan that reduces the 10-year deficit by at least $1.5 trillion. It’s vital, however, that they achieve far more than that. Americans are rapidly losing faith in the ability of Congress to deal with our country’s fiscal problems. Only action that is immediate, real and very substantial will prevent that doubt from morphing into hopelessness. That feeling can create its own reality.

Job one for the 12 is to pare down some future promises that even a rich America can’t fulfill. Big money must be saved here. The 12 should then turn to the issue of revenues. I would leave rates for 99.7 percent of taxpayers unchanged and continue the current 2-percentage-point reduction in the employee contribution to the payroll tax. This cut helps the poor and the middle class, who need every break they can get.

My friends and I have been coddled long enough by a billionaire-friendly Congress. It’s time for our government to get serious about shared sacrifice.

Warren E. Buffett is the chairman and chief executive of Berkshire Hathaway. 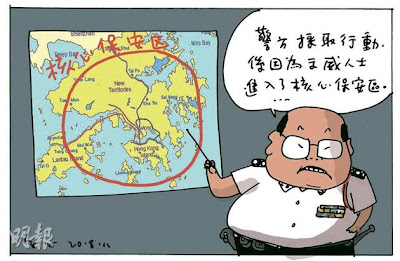 記者昨日以英語追問，有批評指有關保安安排違反言論自由及新聞自由，唐英年不認同批評，以英語嚴辭指摘有關批評「完全是垃圾」（I think that is completely rubbish that we have violated civil rights, nor have we violated freedom of speech, because every single activity of the Vice-Premier has been covered by the media.）